Reddit Marketing for Games: How to Get Organic Results

Facebook and Instagram have remained every business owner's go-to digital marketing platforms. But when it comes to the gaming industry, you have to go the extra mile to reach your gaming audience — marketing only on conventional media may not be as effective. To spread the word about your new game, you need more gaming-specific platforms like Reddit. 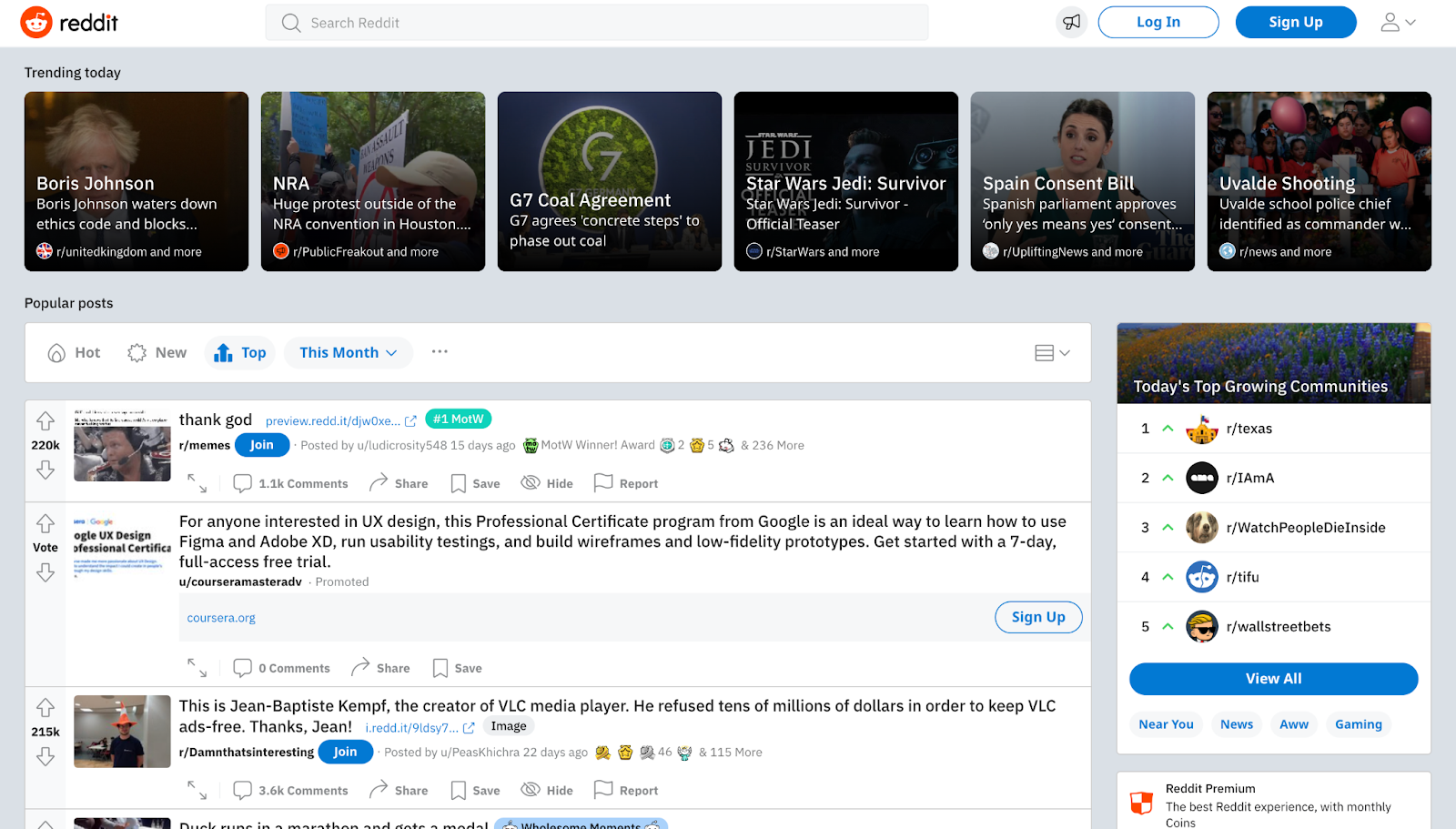 Reddit is a popular "social news aggregation" and discussion website with more than 100,000 communities — called subreddits — centered on varied topics. Gaming remains the most discussed topic on Reddit. All top-rated subreddits in 2021 were related to gaming. Therefore, even the most reputable gaming brands leverage Reddit to market their games and stay connected to their target audience. 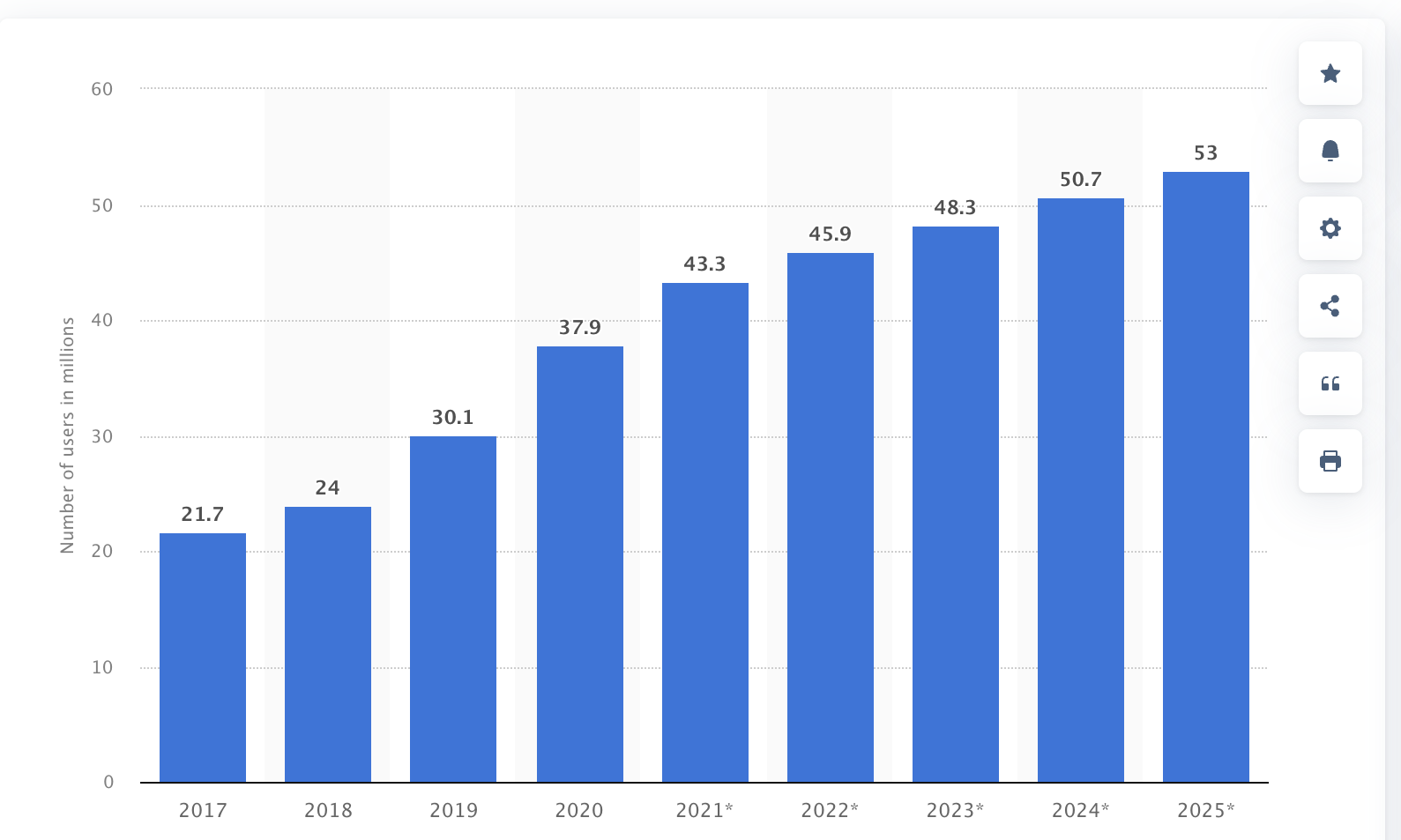 Unfortunately, Reddit is one of the most underutilized social media platforms. But that doesn't mean your target audience doesn't spend time here. There were approximately 1.5 billion visits to the Reddit online forums in February 2022 according to data from Statista. This makes Reddit the 6th most-visited website on the internet. Therefore, not leveraging Reddit is no less than leaving money on the table!

Additionally, Reddit is a crucially important website for game devs targeting younger male audiences. According to data from Thrive My Way, 61% of Redditors are male, and 82% of them either have a college degree or are on their way to receiving one. People aged 18 to 29 make up Reddit's most extensive user base, and 30 to 49 is the second-largest age group on Reddit. It is also noteworthy that approximately 42 to 49% of Reddit's user base is ‌in the United States. So, investing in Reddit game marketing is essential if you're targeting young, video-game-loving men.

This tip may seem counterintuitive since we're talking about marketing! But the truth stands: the best marketing posts on Reddit aren't directly promotional — unless they are Reddit Ads. Though Reddit is an ideal platform to spread the word about your game and engage with gamers, you can't outright share the links and promote your game. The users will shun you if you do so.

But why is it so? Simply because Reddit is a discussion platform that thrives on the sense of community. On Reddit forums, people help each other, answer questions, and solve problems. Therefore, you won't get any return unless you make a valuable contribution to the community and help the members. Interestingly, the Redditors are smart enough to spot implicit promotional posts and are hostile towards them. To that end, most subreddits have strict rules restricting promotions.

These facts don't make Reddit an unsuitable platform for promotions. After all, Reddit has brands like Audi and Adobe as its marketing partner — how can it be anti-business? It even boasts about its ad platform, where you can place Reddit ads for games. Though Reddit takes a firm stance toward promotions, it is open to businesses joining the forum. The idea is to prioritize community relationships and offer value rather than only selling. Strike the right balance between promotional and problem-solving posts. 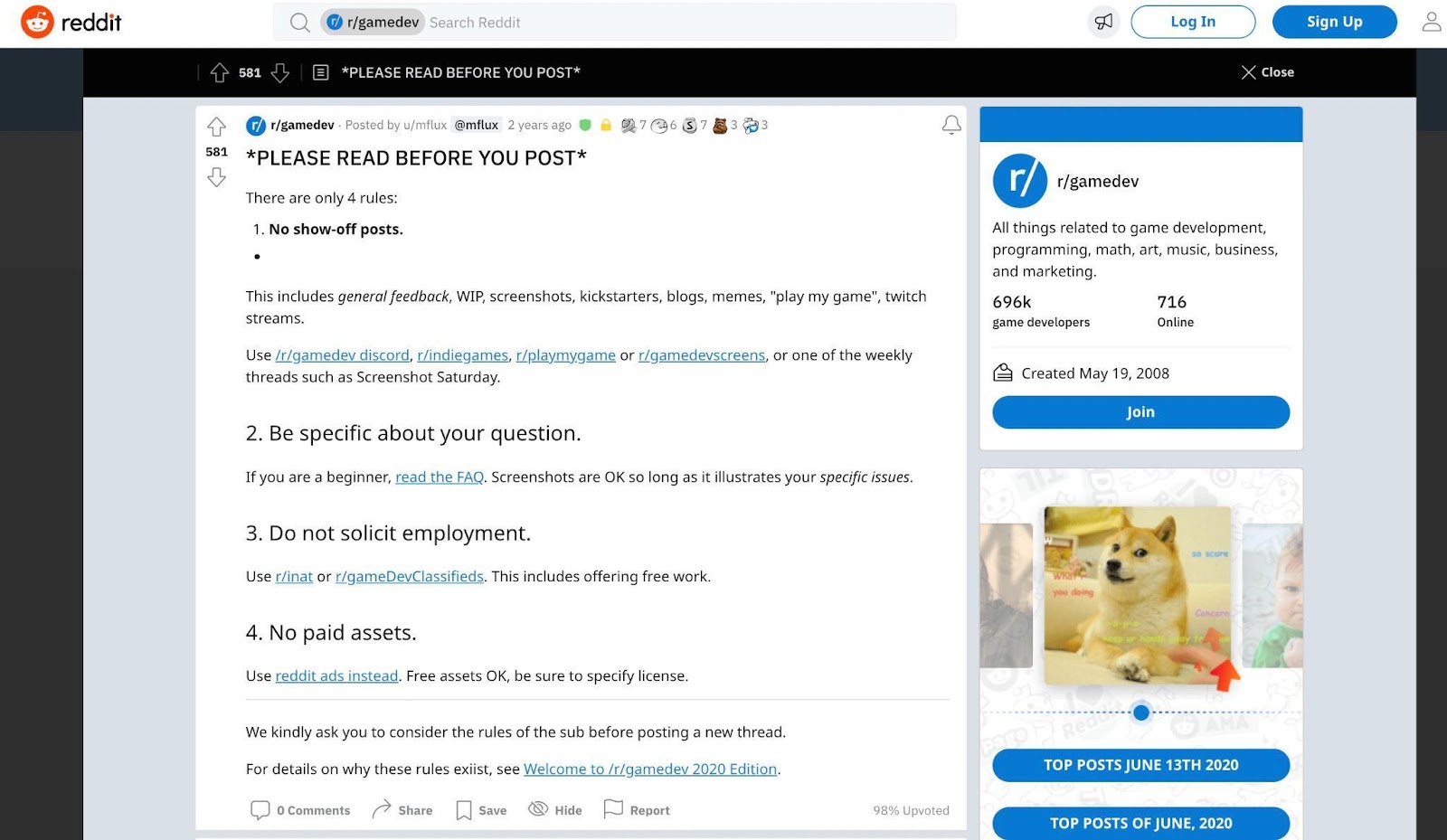 You won't want to get banned if you're going to scale on Reddit and position yourself as an industry expert. Therefore, before sharing a post, be thorough with the rules of the subreddits. Carefully read what's allowed and appropriate and what's not. Pay special attention to the regulations related to self-promotion. This is a good starting point if you're looking to promote your game on the platform. Knowing the rules well will enable you to post valuable content that gets the most upvotes. This will build people's trust in you. As a result, they will confidently visit the links you eventually share, which, in turn, will get you more downloads.

Do note that you'd have to be an active Reddit user before promoting your games on Reddit. Show your "activeness" by commenting, downvoting, and reporting spam. Most importantly, post easily accessible and informative content. Whatever you post should engage and resonate with the community members. It shouldn't be "marketing-y" or "clickbait-y" but honest and valuable. Following these tips will help you create a positive identity amongst the Redditers. 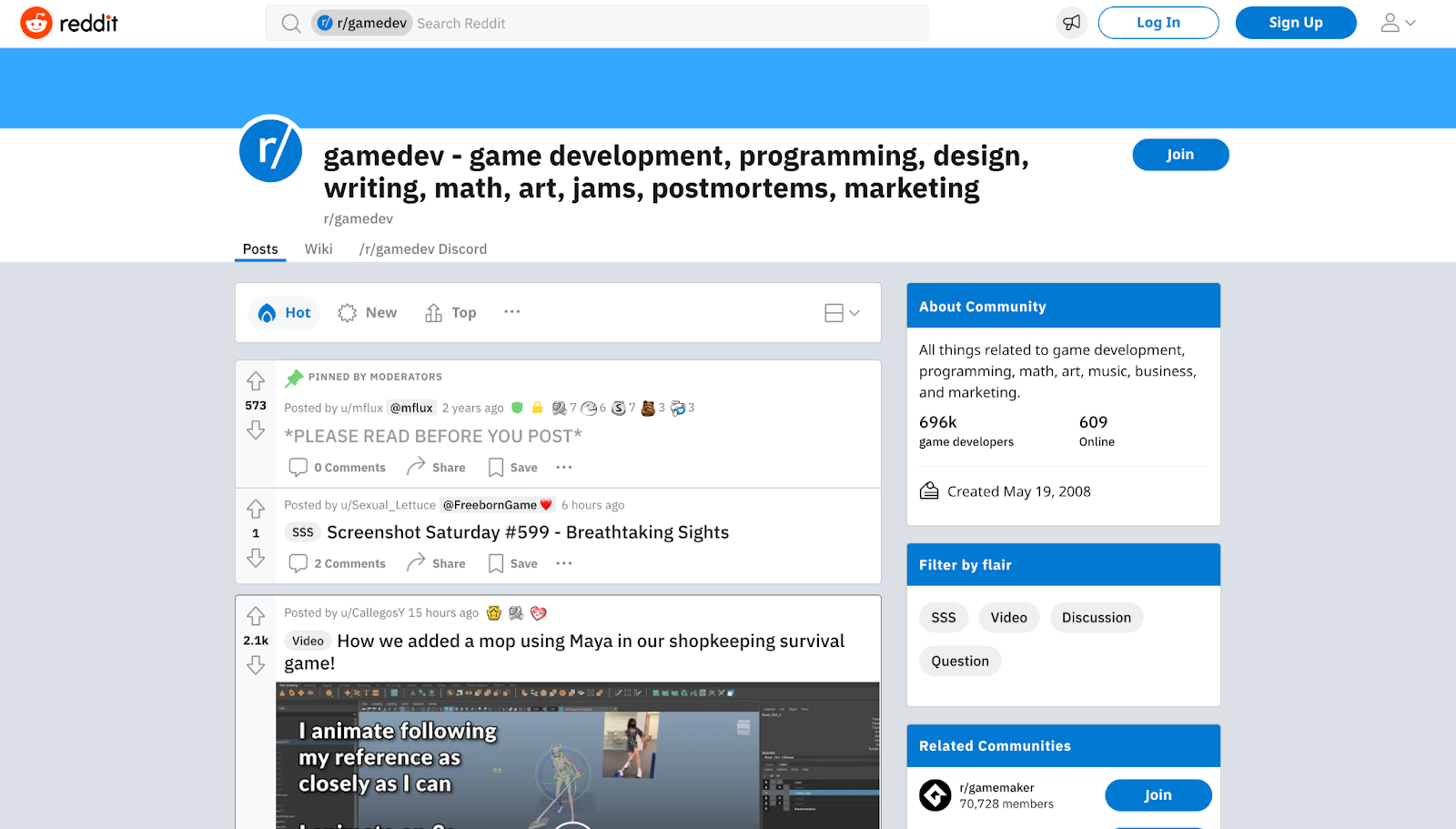 Since gaming is a prominent topic on Reddit, there are many gaming subreddits you can subscribe to. Be sure to take part in the discussions in the subreddits you join. Give feedback to others — inoffensively — and talk about games/gaming-related subjects that interest you. This will position you as someone with a good knowledge of games and who is interested in the gaming industry. It'll give way to potential business opportunities.

We have curated some popular subreddits you can be a part of. They include:

With more than 696k members, this subreddit is a popular community in the gaming sphere. Professionals from all aspects of game development — artists, designers, and programmers — are a part of this community. Game devs who need help adding an element to their game often find answers on this subreddit. The value available here is matchless, as the members are experts and have created several games. Therefore, joining this subreddit will be a learning experience in itself! Besides, you can showcase your work and connect with like-minded game developers.

Joining a subreddit created for indie developers will be beneficial if you're creating an indie game. The r/IndieDev also welcomes gamers who enjoy playing indie games, as it views them as potential developers. The space is inundated with screenshots of the current projects developers are working on and their queries. It is an ideal platform for people who have just initiated their game creation journey. This is where you can even share your teasers and new releases.

This subreddit is ideal for sharing and discussing news related to PC gaming. With 2.8 million members, the subreddit is also a space where you can post about your upcoming game, provided you follow the guidelines. You can even host giveaways, enticing the community members to download your game. Again, make sure to read the giveaway rules carefully.

The best part about Reddit marketing is that you can find an audience for your games, no matter how niched they are. For instance, game devs targeting girl gamers can join the r/GirlGamers subreddit. This community currently has 171k members and is described as "gamers who also happen to be women." You can find discussions on general gaming topics and even vent-outs about harassing online experiences. Remember that your posts and comments should be appropriate for the audience.

With 106k members, r/Gaming4Gamers is a "middle ground between purely-for-fun subreddits and the more serious ones." The space is an ideal hangout spot for people who love video games. So, this is the place where your potential gaming customers reside. The best part about this subreddit is that it promotes open-minded discussions and allows people to voice their opinions.

4. Join and post on non-gaming subreddits that relate to your game

This is an incredible way to promote your game without actually promoting it! Though commonsense dictates you should join gaming subreddits, participating in non-gaming subreddits can also do wonders. So, if your game is about animals, joining a non-gaming, animal-related subreddit is an intelligent move. But remember to never directly promote your game here, as it may seem irrelevant. Instead of outright selling your game, post a cute video snippet of your game featuring the in-game animal character. You subtly spread the word about your game without explicitly promoting it.

This is the hack that Ally Bank resorted to while promoting themselves on Reddit. They got creative and posted on a PlayStation subreddit where finance-related discussions never happen! But their ad headline said, "you wouldn't settle for a 1-star controller, so why settle for a 1-star bank?" Pretty clever, hey? 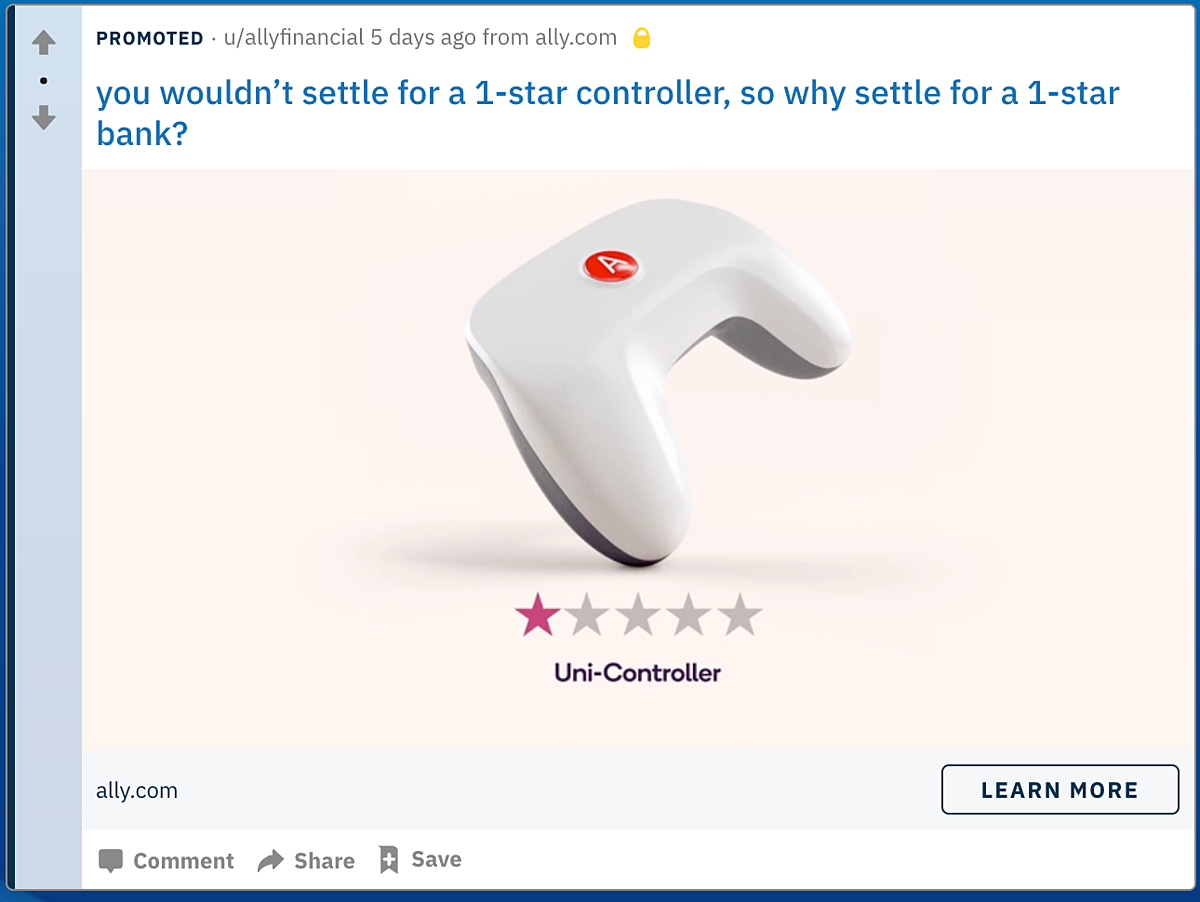 While this is a clever trick, note that it may not get the expected results. In other words, you may or may not get hundreds of game downloads from this post. But the idea is to give to the Reddit community without expecting any returns. 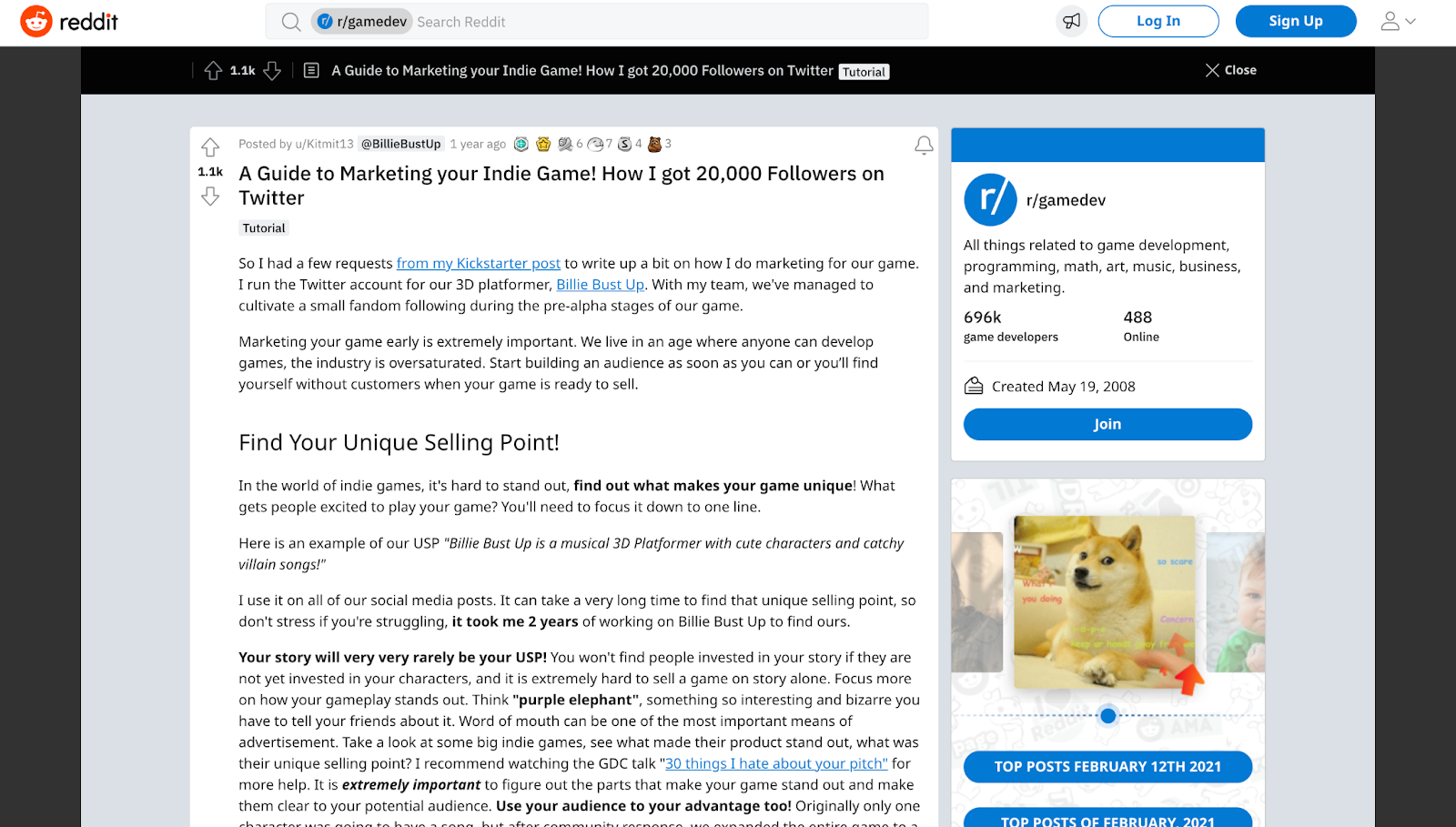 We've been talking about contributing to the Reddit community throughout this post — now, we will explain how you can contribute. Posting valuable educational content on Reddit is perhaps the most important tip. This will position you as a subject expert, helping you build a generous identity, and allow you to promote your game subtly.

Ensure whatever you post is relevant to the subreddit. Also, remember that your posts shouldn't address a broad audience but a niched one, specifically the one best suited for your game. So, before posting, do some research. Examine the most popular posts in the subreddit. Apart from the type of content that gets the most upvotes, analyze the language and body of the written posts. This will help you create comprehensive posts that resonate with your target audience. And do not forget the most significant rule of thumb: no clickbait.

Additionally, keep your writing simple. You can even add a few links in the body if the subreddit allows. This will boost website traffic without getting you banned on Reddit. If you want to add images to the posts, prefer taking them from the Reddit-approved websites, like Imgur and Gfycat.

The types of informative posts that get the most attention are lists, articles, and short videos. Listicles are specifically engaging, as they are easy to read and understandable. They help share information in a digestible manner. Apart from written posts, you can even share short videos addressing your audience's pain points.

Unless your niche is highly obscure, your posts would be relevant for other subreddits closely related to the one you're already a part of. And since not all community members will see your posts, you can boost visibility by cross-posting on other subreddits. However, do not start posting on every different subreddit immediately after uploading to the original community you're a part of. Cross-post every 1-2 weeks to avoid being reported as spam. Also, tweak the title to let people know where the post was originally uploaded. Here's an example:

Make your game stand out among the masses with Your Must-Have Guide for Social Media Marketing!

Implementing these tips will help you market your game on Reddit without getting shadow-banned. But does that mean you don't need to invest in a Reddit marketing agency? If you want efficient and quick results, hiring a game marketing agency is the ideal choice. Growing your gaming brand on Reddit is challenging, and conventional marketing techniques don't always work. Unlike Instagram and Facebook, Reddit has authorities that can ban you for self-promotion. However, the right agency will have the skills to maneuver the rules and get you the results.

We have you covered if you are ready to increase visibility and spread the word about your game on Reddit. Game Marketing Genie creates bespoke game marketing strategies for developers and reputable gaming brands.

To get a tailored Reddit marketing strategy, get in touch with us today.

The Game Dev’s Guide to the Best Game Launch