Is Cloud Gaming the Future of the Video Gaming Industry?

Technology is constantly changing, and the video game industry is no different. We are heading to a future where discs, downloads, and even consoles may not be required since people will be able to stream their favorite games across the internet just as easily as they stream their favorite movies on Netflix.

This is called cloud gaming, and it's expected to change the way games are played, distributed, and sold. Cloud gaming isn’t a new idea. The concept has been around for a while, but it has failed to take off because of technological and economic constraints. But this time, it feels like everything is in place to bring cloud gaming to the world.

What is cloud gaming?

Cloud gaming is a revolutionary technology that allows users to stream and play their favorite games directly from the cloud instead of a gaming device or specific hardware.

Today, most video games are purchased as physical media or downloaded into a device such as a smartphone, PC or gaming console. When the game is played, quality and performance are controlled and optimized for that device.

With cloud gaming, content execution is moved from the consumer's device into the cloud. Players stream games just like they stream videos on Netflix as compressed video frames - only that the videos respond to user input. When a user presses a button for a character to jump, the input is sent to a remote server that informs the game what you have done. It then sends a new video frame of the character jumping. This happens very quickly, in a fraction of a second, and looks just the same as a game that was downloaded onto a device. 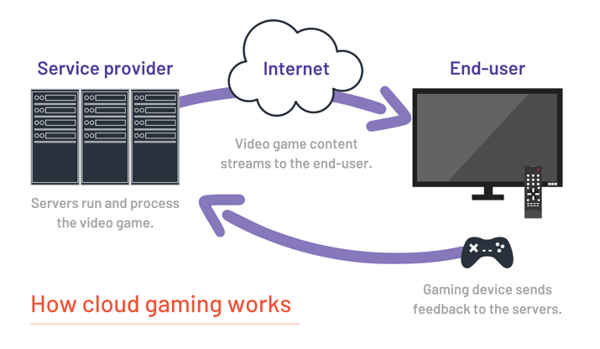 Cloud gaming brings fantastic gaming experiences to a large audience. It allows gamers with device or hardware limitations to enjoy the same titles through a cloud environment with low latency.

The industry is also on an upward trajectory with analysts expecting the cloud gaming market to be worth $450 million in 2023, up from $45 million in 2017.

Google Stadia and Microsoft xCloud are some of the front runners in the industry. Google Stadia works on PCs or laptops with a Chrome browser, Pixel phones, or a Chromecast Ultra dongle that’s plugged to the HDMI port of a TV.

Microsoft xCloud streams high-resolution, intensive games to a wide range of devices such as mobile phones and even aging, low-powered desktops. Like video streaming devices, you can start playing your game on your smartphone, then pick it up on a laptop or TV when you get to a bigger screen. 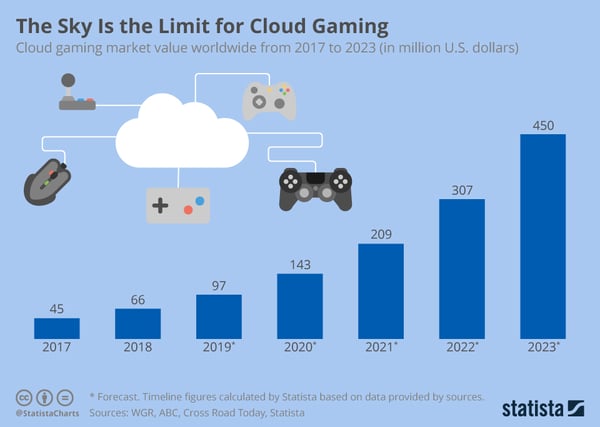 What does a switch to cloud gaming mean for the gaming industry?

Cloud gaming has been hailed as the future of the gaming industry, and here are some of the benefits it’s expected to bring.

Cloud gaming systems store user data on secure servers. The data is also transferred through secure connections, thus eliminating the chances of hacking. Game data is stored on the cloud, eliminating the worry of saving the data locally.

By prioritizing the security of the user and game data, cloud gaming services give players one less thing to worry about. Gamers are free to enjoy their favorite games with the knowledge that no one can access their private data.

Through the highly scalable platform, high profile video games can even be played on lower-end devices. The limitation that was brought about by processing power, graphics capacity, and memory storage has been removed through the cloud platform, providing users with a fantastic gaming experience.

Another obvious advantage of this gaming technology is lowered costs. Cloud gaming eliminates the need for upgrading to the latest gaming system. Once you acquire the game hardware, you're set for life. You will not have to buy the latest consoles every few years to enjoy better game functionality since the GPU is held remotely. When the provider upgrades their system, consumers can use the new gaming platform instantaneously.

Users also don’t have to pay for individual titles. They pay a subscription fee to enjoy a ton of games at a lower cost. Reducing the cost of gaming will attract more lower-income consumers, thus increasing the number of players.

Secure cloud servers will also bring an end to piracy. This is because the service provider maintains game content, and this prevents the game from being manipulated. Publishers now have more reasons to adopt this gaming technology that guarantees them more income by making it difficult to pirate video games. 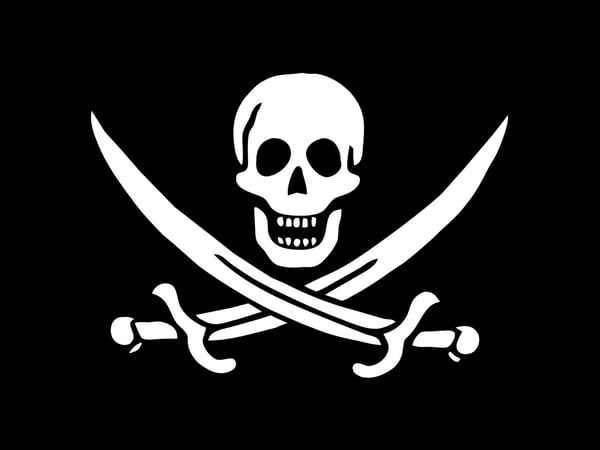 Most non-mobile video games are chained to specific consoles and PCs (often Windows). They cannot run on other devices, thus they can only be enjoyed by the portion of the population that has access to these devices. Cloud gaming services allow games to be more platform-independent. PCs and tablets running Linux, iOS, Android, and Chrome OS operating systems can play games that previously could only run on Windows devices.

Video game marketing will be enhanced since game devs will be able to target more people, resulting in higher revenues. Work a video gaming marketing agency to attract more players for your game.

The storage capacity of cloud games is more flexible and scalable than that of traditional gaming systems. This allows the content providers to provide support information to the players as soon as they log into their accounts.

Cloud services providers also help players perform activities such as saving the gameplay to prevent loss of data and to remove difficulties when accessing the game from another platform. The real-time support and easy access ensure gamers have a good time when interacting with the gaming system, and this keeps their satisfaction levels high.

A vast sea of games all at the audience fingertips

Cloud platforms ensure users can access multiple games from one location for their entertainment. Gamers get a delightful experience by being able to choose from a wide variety of titles, while developers earn more money since more people can access their games.

Microsoft xCloud, for example, provides access to more than 150 games through its Ultimate tier subscription. The offering includes blockbuster titles delivered to users in an on-demand, Netflix-style format.

Google Stadia, on the other hand, has 152 games on offer as part of its Stadia Pro plan. Users pay under $10 a month to access premium versions of games like Assassin’s Creed Valhalla, PUBG, FIFA, and more.

So, is it the future?

We say yes, but it will not be a complete or immediate shift to it. Audiences still enjoy the console/physical copy experience, especially hardcore gamers who value things like latency and the overall gaming experience. But for casual gamers who are willing to make the odd trade-off when it comes to gameplay lag, cloud gaming is an attractive option because of all the good things it brings to the fore.

Bigger gaming companies are making a move towards it, highlighting the direction the gaming industry is going to take in the coming years.

“All the major gaming companies – Sony, Nintendo, Microsoft – will update its flagship console this fall, but the next big platform might not be a box or a plastic disc or even a download. It’s cloud gaming.” says Kareem Choudhry, VP of Gaming Cloud at Microsoft.

Cross-platform syncing is one of the features that make cloud gaming an attractive prospect for people who want to make the switch from traditional console entertainment. There is also the issue of gaming portability that allows gamers to continue their games on their phones and other platforms. This support for mobile devices makes cloud applications the future of seamless entertainment. With people desiring such seamless experiences, we should expect more people to embrace cloud-gaming platforms.

Netflix and Spotify are successful largely because of their mobile apps. Cloud streaming services also allow users to transfer gaming content to their phones, thus enhancing the mobile experience. The number of games players can access at any given time have also been increased, and this variety also contributes to making cloud gaming attractive.

For a few more things that we think might be the future of video game marketing, check out What Does Mixed Reality Mean For the Video Game Industry?

And our blog over at Atisfyreach: Why Influencer Marketing is the Future. 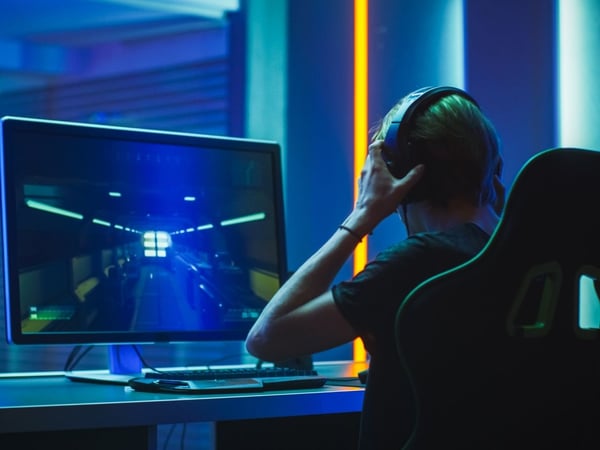 Cloud gaming is on the radar, and if you want to break into it, you need to know how to market it. Cloud streaming services allow players to access multiple games at a time, but without proper marketing, they will not be excited to try your game when they come across it.

Game Marketing Genie can help you market your game to a large audience. As a video game marketing agency, we know what players look for when choosing video games to play, and we will package your game properly to improve discoverability. Contact us today to discuss how to make more people fall in love with your game.